I'd love to hear from you 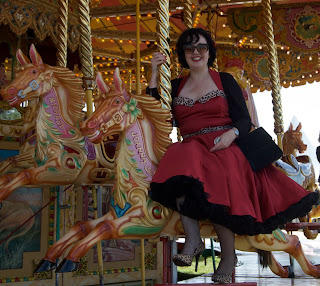 You couldn't get the smile off my face; the sun shone, the racing cars roared, the bands played those 40s tunes, the people laughed and drank champagne under a clear blue sky - and everyone but everyone looked fabulous.

It was the perfect autumn day and we set out from our overnight stay in London at nine and arrived at the gates of Goodwood at 11am. I was planning to wear an outfit of my own creation but in the end with the sun beating down I opted for my Tara Startlet red dress which I bought from Twentieth Century Foxy back in July. I did make my daughter's outfit though in this sweet Laura Ashley strawberry print. My DH looked fabulously Brando and I think we looked rockin' in the end.

Throughout my recent illness I doubted that I would ever be able to make this event, as at times I couldn't venture very far from my home - but yesterday sat on this carousel with my little girl on the horse in front I whirled around under a perfect sky and I thought I was in heaven. It was my fairytale ending... 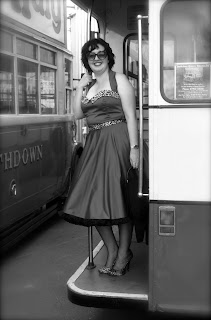 Everybody made an effort and the 40s, 50s and 60s were well represented. The air was thick with nostalgia and fun but there was just a slight tinge of sadness; John Surtees chocked with emotion as he talked on the screen above the track about the friends he had lost during those dangerous early racing years. WW2 flypast in remembrance of the Battle of Britain during its 70 year anniversary was poignant too. I know those of us interested in vintage are sometimes critised for ignoring the difficult circumstances of the eras we pay tribute to, but for me the fact that women looked damn good and gave a damn about how they looked despite the difficulties and tragedies they faced says an awful lot about their spirit and courage. For me, my admiration for these decades is as much about that as the clothes they wore.

Were you there? What did you wear? What was your day like?
Posted by Charlie at Sunday, September 19, 2010

Charlie
Usually found at a sewing machine or applying lipstick on a bicycle... I'm Charlie a wife, mother and lover of all things vintage. I sew many of my clothes from vintage patterns or from vintage inspirations. Come with me on my journey into the past making stuff for the future.

And the winner is ... roll call of the companies Charlie hearts